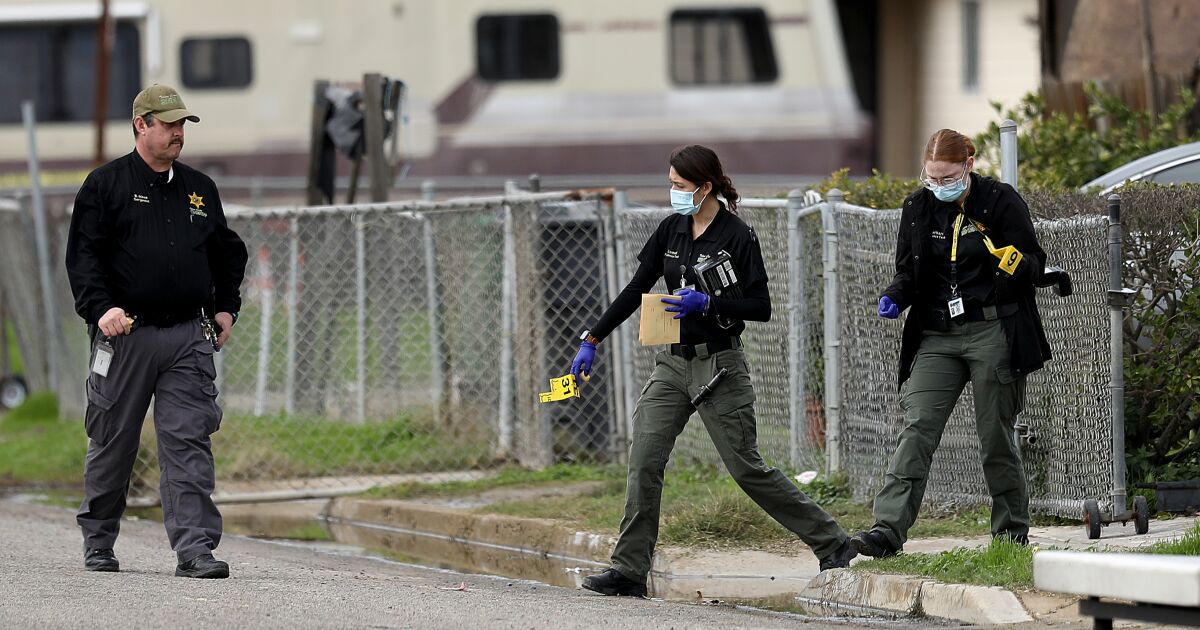 The body of the 16-year-old girl was found crumpled outside the home, along with her dead 10-month-old son. It was clear to investigators who came upon the scene in the early hours of Monday morning that the young mother had tried to run away with her baby in her arms. But forensic evidence showed she had been caught before she could escape, and both she and her child were shot in the forehead from above, execution style.

Four other people, including a grandmother asleep in her bed, were murdered with similar cold professionalism in the rampage at a family compound in the farm town of Goshen.

Speaking to reporters just a few hours after his deputies had responded to the violent scene, Tulare County Sheriff Mike Boudreaux characterized the massacre as a targeted attack by an unspecified drug cartel. “The drug cartel,” in his words. What else could explain the depravity of executing a baby?

Twenty-four hours later, at a press conference Tuesday in which he identified the six victims and pleaded with the public to come forward with information, the sheriff modulated that assertion slightly. “I’m not saying this is a cartel,” he said. “But I am not eliminating that possibility.”

In this impoverished, dusty outskirt of the San Joaquin Valley, and far beyond, many were left considering the same possibilities when grappling with who would commit such a heinous crime.

Boudreaux said investigators were looking for at least two shooters, and possibly a third accomplice. The victims, many of whom were related and who ranged in age from 62 to 10 months, were shot in the head and “in places a shooter would know a quick death” would follow. “Going in and massacring an entire family goes above and beyond,” he said. “Which is why I continue to focus back on high level gang style execution or cartel style execution, because this is not normal.”

Standing behind the sheriff as he spoke were agents from the Bureau of Alcohol, Tobacco and Firearms and the FBI — just a few of the many agencies the sheriff said have stepped in to assist Tulare County investigators in solving the crime.

The sheriff said that at least three people survived the rampage, which began when the assailants forced open a door to the home on Harvest Avenue, a residential pocket of houses circled by chain link fences in a mostly industrial area bordering State Route 99. One man in the main house hid by lying on the floor of a bedroom while two women were in a trailer where the gunmen did not find them.

The survivors, the sheriff said, are “providing a great deal of information,” though he declined to reveal it. “I know a lot, but I can’t answer that question,” he said at one point, adding that the perpetrators could be watching his news conference.

The sheriff said his deputies arrived at the compound just seven minutes after the first 911 call, but the shooters were long gone by then.

Boudreaux asked for help from the public in the investigation, requesting that neighbors, business owners and anyone in the area of the shooting check for video footage from early Monday, and share anything suspicious with law enforcement. Officials announced a $10,000 reward for information that would help move the investigation forward.

“We’re pulling out all stops, we’re turning over every rock,” he said.

The sheriff also noted that the property where the massacre occurred was a “known home to our department” for gang activity.

He said deputies had found guns, marijuana and methamphetamine at the home Jan. 3, following a parole compliance check.

They arrested one of the victims of the massacre, Eladio Parraz, Jr. after that search, but said they did not believe their search was related to the violence, nor that Parraz, who was 52, was its intended target. They declined to say whether they believed they knew who the target was.

In court records filed in conjunction with the parole check, officials describe Eladio Parraz Jr. as a “documented Sureño gang member.” The Sureños are a group of loosely connected gangs that answer to the Mexican Mafia prison gang. He was detained on suspicion of being a felon in possession of ammunition after deputies found live rounds and spent shell casings from a shotgun and semi-automatic handgun on the ground, and was released a few days later.

But the sheriff said many of the people killed at the property had no gang affiliation. He named Rosa Parraz, the 72-year-old grandmother killed in her bed, along with Elyssa Parraz, 16, the young mother, and her 10-month old baby Nycholas as “innocent victims.”

Other victims identified Tuesday were Marcos Parraz, 19, and Jennifer Analla, 50. Analla was a girlfriend of one of the survivors, Boudreaux said. (Authorities on Monday shared the incorrect ages for Elyssa Parraz and her baby.)

“I cannot comprehend it,” the Elyssa Parraz’s grandfather told ABC 30 News. “I can’t understand who can just kill a baby like that. I can’t wrap my head around it. How can someone be a monster and do that?”

The slayings have stunned the quiet town of Goshen, a mostly Latino community of about 5,000 just outside Visalia, and brought a wave of fear to the area. Since at least the 1970s, Tulare County has played an outsized role in the transnational drug trade between Mexico and U.S. markets, which has repeatedly brought violence to the Central Valley county.

As news of the massacre sunk in, a palpable air of trepidation seemed to descend on the neighborhood where the violence occurred. On three occasions, residents approached a Times reporter in the area, asking him to move his unfamiliar car from near their homes. All declined to identify themselves, though one explained that they didn’t want a local gang to think they had spoken to the police.

Mike Alrahimi, owner of a nearby general store around the block from the site of Monday’s shooting, said he was horrified by the violence.

Alrahimi said he didn’t know the family but figured they must have been in his store at some point. Nothing so violent has happened in the neighborhood in the 39 years he has lived in the area.

“I feel bad for the family, for the neighborhood,” Alrahimi, 65, said. “Everyone is sad.”