Australians are cramming beaches to mark Australia Day, but celebrations are expected to be muted in some cities, with protests also taking place around the nation.

With the temperatures soaring, beaches around the country are expected to be packed as Australia Day is marked in different ways.

Sydney will see the annual ferrython and harbour parade followed by a live concert this evening. A simultaneous protest March starts from Belmore Park at 9.30am.

﻿In Melbourne﻿, meanwhile, a more subdued marking of the national day is anticipated. 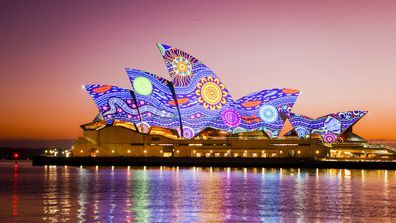 Police have set up surveillance cameras around a statue in St Kilda of James Cook, who charted and claimed Australia’s eastern seaboard for Britain in 1770﻿.

Last year, the memorial was vandalised with red paint.﻿

An Invasion Day protest takes place from 11am in Melbourne, where there will also be a 21-gun salute and entertainment from Federation Square.

The sails of the Sydney Opera House were illuminated at dawn today with artwork depicting and honouring stories of the Gadigal women of the Eora nation.

Kamilaroi woman and artist Rhonda Sampson from western Sydney was commissioned to create the artwork Diyan Warrane for the display on the Opera House sails.

The artwork represents the important role of First Nations’ women around the waters of Warrane (Sydney Harbour).

These waters were known as the “women’s domain”, where Gadigal women would fish throughout the harbour, from Me-Mel (Goat Island) to Ta-ra (Dawes Point).

The artwork honours four celebrated women of the Gadigal people, Boorong, Patygerang, Daringa, and Barangaroo, who were all very skilled fisherwomen with their own unique individual stories and contributions.

“The harbour has always been integral to the everyday lives of the Gadigal people of the Eora Nation and it’s important we continue to share their stories. It is important will listen,” Sampson said.

“It is important to me to share the Eel Dreaming Story of the Gadigal people of how the waterways of Warrane were formed, and how the Gadigal women used those waterways to fish and feed their people. They listened to the harbour, to Mother Earth – we all need to listen.”

Sampson said she was “honoured” to see her work on the sails of the Opera House.﻿

“This day brings up a lot of feelings and we need to reflect on that,” she said.

NSW Premier Dominic Perrottet said the Dawn Reflection was a very appropriate way to start January 26, which can be a conflictual date for many.

“The state of NSW is proud to continue important conversations to recognise the history, culture, excellence and achievements of Aboriginal people, such as the stories of these four women,” he said.

“It is the third year for the Dawn Reflection, and it is a moment to pause and reflect on our country’s First Nations history, and the steps we need to take to become a unified country. Amplifying Aboriginal voices allows us to show the authentic connection between our First Nations people and the land on which we all live,” Parker said.

“Every day we walk in our ancestors’ footsteps, and as we gather it’s important to reflect on our past, commemorate and honour those who have gone before us and our history – and celebrate the survival of our people, our culture and our history,” she said.

“When we bring our First Nations voices and share our truth and stories to January 26, we create meaningful discourse and change. The dawn projection offers an opportunity for Australia Day to start with a reflective moment that recognises our First People and celebrates our culture as it is shared on the sails of the culturally significant Sydney Opera House.”

The ﻿symbolic union of Australia’s pre- and post-colonial history is unlikely to defuse the controversy surrounding January 26, with Invasion Day protests set to march in major cities around the country.

And Australians around the country will flock to beaches and parks for celebrations during the public holiday.

New citizens are also set to be welcomed, though some councils have elected to hold their ﻿ceremonies on a separate date.

“In choosing Australia as their home, they are embracing the values and qualities we hold dear: our belief in opportunity for all, the respect we have for hard work, the optimism that drives our aspiration and the Australian instinct for fairness, decency and care and respect for each other,” he said.

Albanese also urged Australians to heed the “gracious, patient” call from the Uluru Statement from the Heart to enshrine Indigenous recognition in the Constitution.﻿

“It would be an expression of pride that would also send to the world a message about our maturity and unity as a nation,” he said.