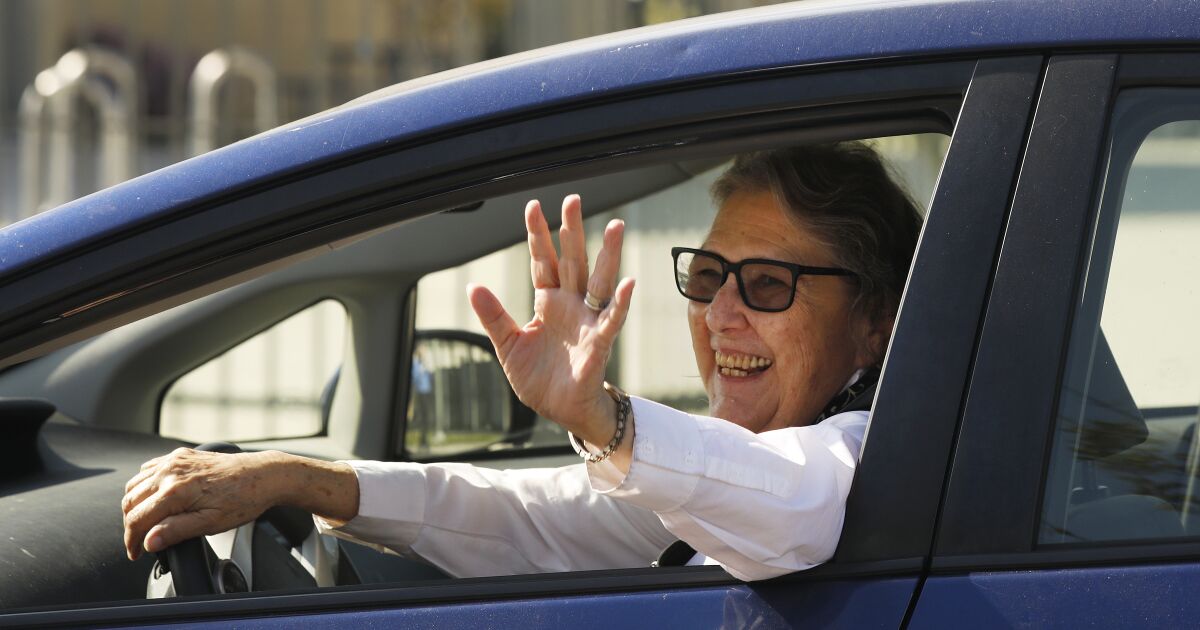 Jackie Goldberg — who served as the Los Angeles Board of Education president 40 years ago and also served on the L.A. City Council and in the state Legislature — was elected president again Tuesday and said her overriding goal is to “double down” on academics so students are achieving at grade level by fifth or sixth grade.

Her election also signals a potential school board majority shift to priorities of the teachers union amid increasingly contentious contract negotiations with it and the district’s service workers union.

In an interview, Goldberg said that, as always, she’s in the job for the sake of students — not to do the bidding of any special interests.

She said she will work “to recover the losses of academic achievement for the kids. … We need to be doubling down on how we get to them to be at grade level by fifth or sixth grade so that they don’t end up dropping out by the time they get to high school.”

Goldberg represents District 5, which represents most of the northeast part, including Eagle Rock, Glassell Park and Echo Park. To the southeast her district includes the cities of Huntington Park, Maywood and South Gate.

Goldberg articulated her academic emphasis in the wake of state test score data that showed alarming setbacks in academic achievement since the COVID-19 pandemic. State test results showed about 72% of students do not meet state standards in math and about 58% do not meet standards in English.

The elevation of Goldberg — who came out of semiretirement to run and win a return to the board in 2019 — represents an early marker of success for the United Teachers Los Angeles union. In November school board elections, the teachers union-endorsed candidate, Rocio Rivas, replaced Monica Garcia, who was part of a faction that the union had opposed.

Garcia could not run again because of term limits. Rivas finished ahead of Maria Brenes, who was backed by Garcia and presented herself as a neutral player in the political battles of the nation’s second-largest school system.

The teachers union-backed candidates now hold a majority of the seven seats. Board members joined together for a unanimous 6-0 tally for Goldberg with outgoing President Kelly Gonez absent.

Goldberg said it will be her job to look out for the needs of all employees.

“I consider all our employees important,” she said, and not only members of the teachers union. “I think our classified employees need our particular attention.”

The soonest collision course with labor could be with Local 99 of Services Employees International Union, which represents the largest number of nonteaching or “classified” employees, including bus drivers, cafeteria workers, custodians and teacher aides.

Local 99 has declared an impasse in negotiations and scheduled a strike authorization vote for Jan. 23 through Feb. 10. If a potential strike is approved, as expected, union leaders would have the authority to call a strike at their discretion.

The teachers union is not as far along in the negotiation process, even though its contract expired in July.

The school board, including Goldberg, has so far stood publicly united behind Supt. Alberto Carvalho in negotiations and policies.

Both major unions are calling for significant pay raises to offset inflation and the high cost of living in Southern California.

Although the vote of each board member has the same impact, the president chairs the meeting, helps set the agenda and frequently acts as a spokesperson for the board and district.

In remarks after the voting, Goldberg said she will add two nonvoting subcommittees of board members — one on procurement and facilities, and another on climate and greening. She also said she wants to increase the influence of board committees to be “more in tune with making changes, suggested changes to the superintendent and his staff on policy issues, rather than having us be mostly hearing wonderful information, but not actually taking steps.”

One unknown leading into Tuesday’s vote for president was whether Goldberg even wanted the job. Goldberg, 78, said she had to reflect before taking on the commitment and it was even more challenging for her family members to accept it.

She said a main difference between this school board and the 1980s and 1990s boards she served on is that her current colleagues are more “amiable” and the district’s financial picture, while challenging, is better than it was then.

Her previous board tenure included a teachers strike, then a massive pay raise for teachers followed quickly by a large pay reduction amid across-the-board cuts. Schools also were overcrowded with rapidly rising enrollment.

Goldberg’s first significant political involvement was as a student leader in the free speech movement at UC Berkeley in 1964. She also worked as a classroom teacher in Compton for 16 years, among other roles.