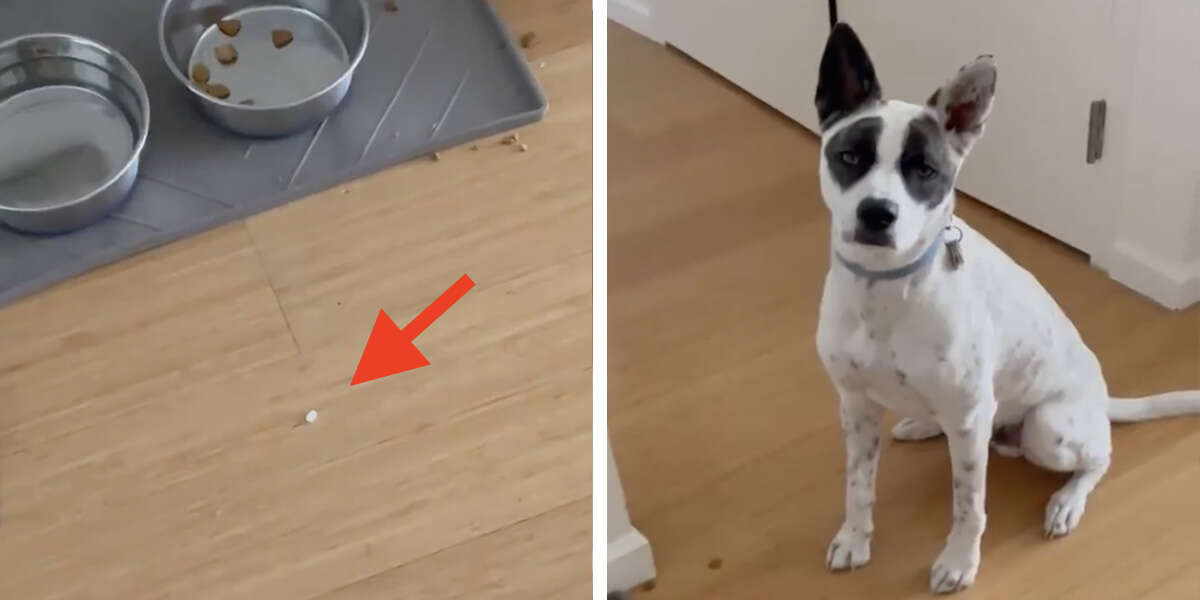 Meet Sundae — a sweet dog with very discerning sensibilities. Indeed, it’s fair to say that nothing gets by Sundae.

Well, except when something does.

Marina Rachael and her family adopted Sundae from New York’s Hearts & Bones Rescue a few years back. He’s a healthy pup, but Sundae does suffer from allergies. So, from time to time, he has to take medicine to keep things under control.

But getting Sundae to take his pill has been no easy task.

Initially, Rachael simply tried sneak the medicine into his food. But, alas, the pup wasn’t about to be so easily duped.

“When Sundae doesn’t wanna do something, he doesn’t throw a fit or bark — he sits and stares you down until you get the point,” Rachael told The Dodo. “The first time we put the pill in his food, he looked at us like, ‘That tastes bad. No, thank you.’ We tried hiding the pill in his bowl with treats, but he’d still walk away when he found it, like, ‘I did not order this.’ By the third attempt, he’d basically trained himself to look for the pill. He’d pick out his kibble and place it on the floor, piece by piece, until he found the pill — then go back to his meal.”

So, with that, Rachael had to get even more creative.

Sundae had caught on that Rachael was trying to sneak a pill into his food, so he always knew to find it and remove it before finishing his meals. He’d outsmarted her.

Or so he thought. That credit actually goes to Rachael for her latest tactic — putting two pills in his bowl.

“I’d put one pill on top [of his food] that was barely hidden,” she said. “He’d pick out that one, and then scarf the rest without noticing the second pill.”

Finding (and removing) that first pill, Sundae is always convinced he’s won the battle of wills:

Using this technique, Sundae always takes his medicine now — content in the false belief that he hasn’t.

“He’s never caught on,” Rachael said. “It’s a method I have continued to employ anytime he needs meds.”

There’s no doubt that Sundae is one clever pup, doing his level best to keep one step ahead of Rachael’s attempts to medicate him.

Cleverness, however, clearly runs in the family.